Located on the Somme, Saint-Quentin is considered the more Flemish cities of Picardy. Its 16th century flamboyant Gothic style Town Hall is the perfect witness to this influence.

It was during this time that protestants fleeing the Catholic Netherlands settled in Saint-Quentin, bringing with them something that will make the name and wealth of the city: flax production. The Fresnoy Le Grand Textile Museum looks back on that time when the weavers made the name of the region.

It has paid a heavy price during the First World War, when more than 70% of the city of Saint-Quentin was destroyed. It was rebuilt in the 1920s and adopted the Art Deco style through which an important heritage flourished. Between forged irons, sculptures and ceramics, it is the more than 3,000 facades that have been surveyed and that are another architectural jewel.

If you want to escape, go out and explore the Réserve Naturelle des Marais d’Isle and discover an abundant flora and fauna that will delight both nature lovers and ornithologists.

Near the A26 and easily reachable, the "initial y balladins" Saint-Quentin / Gauchy welcomes you! 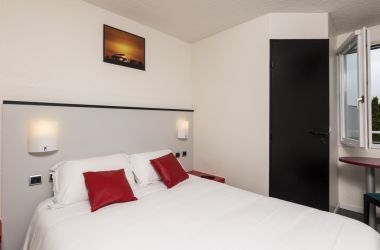